Thaler, a pioneering economist at the University of Chicago, has helped redefine how we understand human motivation and decision-making. His groundbreaking research into behavioral economics has upended the concept of homo economicus—the notion that people are completely rational decision-makers—and found that humans are often quite irrational in their economic decisions. But Thaler’s discoveries aren’t limited to economics. We can also draw on his work as we address global challenges like climate change.

Human psychological biases and behavioral tendencies—such as preferring that things stay the same, avoiding things that are difficult, and discounting the future—exacerbated the effects of the 2008 financial meltdown. (In a memorable scene from the 2015 film The Big Short, Thaler and pop singer Selena Gomez helped explain one of them). These tendencies also contribute to why humans are hard-wired to make climate change such a terrifically hard problem to solve. Changing behavior to address environmental challenges has proven difficult because it usually requires cooperation amongst groups, and the benefits often take time to see.

But the principles of behavioral economics, like those advanced by Thaler, give us reasons for hope. One bedrock principle of Thaler and other behavioral economists is that people are emotional and “predictably irrational” in their decision making. For example, people tend to assign greater value to things if they own them. Thaler calls this the “endowment effect.” In a famous experiment, Thaler gave mugs to half the students in a classroom. The students who received mugs believed the mugs were twice as valuable as the students who did not receive one.

Those of us working on environmental issues can leverage this behavioral principle to promote policies and practices to protect the environment. Just think of Americans and bald eagles. Bald eagles are no longer on the endangered species list, but killing one carries a maximum penalty of $250,000 or two years imprisonment. At the same time, the maximum fine for killing an animal that is on the endangered species list tops out at $100,000 or one year in prison. As a national symbol, Americans revere bald eagles, and our policies—however illogical—reflect that. Creating emotional connections between people and a coral reef or a local bird species could lead people to support their protection.

Rare, the international conservation organization I lead, uses this insight in our work protecting fisheries in countries like the Philippines, where more than 1.6 million fishers and their families rely on coastal waters to provide income and sustenance (and where carbon-capturing natural resources like mangroves, sea grass, and coral reefs abound). Illegal fishing and overfishing has threatened fish stocks and the livelihoods of these rural communities. But rather than telling a fishing village how to manage its waters, we work with them to design their own solutions. This sense of ownership inspires fishers to not only abide by the management rules they set for themselves, but also become long-term stewards of the ocean ecosystem. A sense of ownership over their corner of the ocean—and all that lives within it—leads them to value it and protect it. 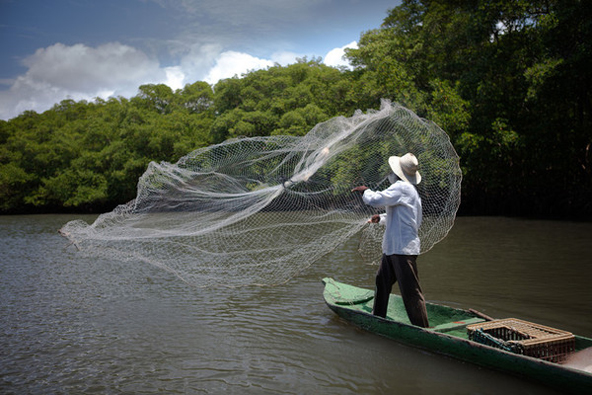 A fisher throws the net in the water in Canavieiras, Bahia, Brazil. The surrounding mangroves help slow the negative impacts of climate change by absorbing carbon emissions from the Earth’s atmosphere, while acting as barriers from extreme weather fueled by a changing climate. (Photo by Enrico Marone)

Another principle from Thaler’s work is “choice architecture.” Humans prefer simplicity, have a limited attention span, and go out of their way to avoid hassles. Changing the context in which people make choices can make new and desired behaviors easier to adopt. This is the root of Thaler’s famous “nudge theory,” a term he helped popularize through a 2008 book called Nudge, which he coauthored with Cass Sunstein and which helps explain how small interventions can encourage individuals to make better economic decisions.

A well-known example of choice architecture from Thaler’s work is “nudging” people toward saving more for retirement. People traditionally had to voluntarily sign up for 401(k) savings plans, or “opt in.” Thaler worked with UCLA professor Shlomo Benartzi to develop the “Save More Tomorrow” program, which automatically defaults people into 401(k)s and commits them to contributing a higher percentage of their salary to their 401(k) over time. Since the plan doesn’t kick in until the employee’s next pay raise, there is no immediate change, making it simpler in the moment and safer for the long-term. In 2006, inspired by Thaler and Benartzi’s research, Congress took up and passed the Pension Protection Act, which encouraged employers to automatically enroll employees into 401(k)s. According to Benartzi, more than half the large retirement plans in the United States and a growing number of plans in Australia and the United Kingdom offer it, and it may have contributed to nearly $30 billion in savings.

Organizations can also make the sustainable, climate-smart decision easy, even fun. One great example is Ant Financial, a Chinese digital payment service, which created an app that “gamifies” carbon footprint tracking. The app tracks purchases made through its payment platform and awards points based on how environmentally friendly a purchase is—for example, buying a public transit ticket vs. fuel for a car. A built-in social network component allows users to compete with friends by using their points to grow “virtual trees.”  According to a report from the Green Digital Finance Alliance, by the end of January 2017, 200 million people across China were using the app, resulting in an estimated 150,000 tons of cumulative avoided carbon emissions.

Behavior change is possible. History is full of examples of people changing behaviors in a way that helps avoid long-term problems. Today, seatbelt usage continues to climb, fewer teens are giving birth, and smoking is on the decline. But individual behaviors like these are easier to shift than others, because the benefits accrue quickly for those who change. If you quit smoking, you save money, your teeth stay whiter, and maybe people judge you less.

Climate change is harder, and stopping it will take more than nudges. If we’re going to slow its effects and change the behaviors that have brought our planet to the brink, organizations working on environmental issues need to embrace lessons from behavioral economics and other social sciences, and embed them in the solutions we design and support. 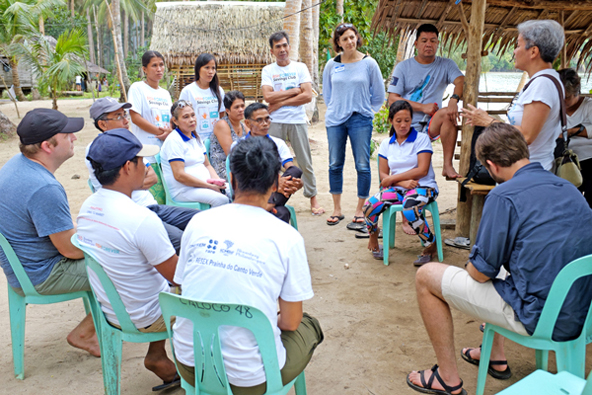 During an August 2017 trip to Tinambac, Philippines, leaders in behavioral research met with conservationists to discuss ways to use behavioral insights to promote sustainable fishing practices. (Image courtesy of Rare)

That is why it is inspiring to see more and more examples of governments and organizations using behavioral insights to address major challenges. The United Kingdom, for example, established the Behavioral Insights Team in 2010 as “the world’s first government institution dedicated to the application of behavioral sciences” to achieve policy goals. Since then, the governments of Australia, Canada, Denmark, Singapore, and the United States, as well as the World Bank, have set up similar entities. The United Nations Development Program Innovation Facility is meanwhile working to incorporate behavioral insights into policymaking and international development, and earlier this year, SSIR explored several ways organizations are leveraging behavioral sciences for social causes. And recently, Rare launched the Center for Behavior & the Environment, an initiative to bring together conservation practitioners and leading minds in behavioral design research to explore how we can use these behavioral insights to support more sustainable, climate-smart behaviors.

As Thaler’s Nobel Prize shows, we understand human nature and what makes people tick more than ever. This knowledge could pay dividends in preventing the next Wall Street collapse. But it could just as well provide a playbook for solving the climate crisis.

Brett Jenks (@brettjenks) is CEO of Rare, an international conservation organization whose mission is to inspire change so people and nature thrive. For more than 20 years, Jenks has led efforts in behavior change for conservation issues around the world.