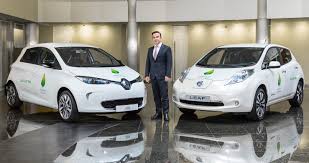 Called Alliance Ventures, the fund has already made its first investment, taking an equity stake for an undisclosed amount in Ionic Materials — a Bill Joy-backed battery technology developer.

The fund said that it will invest up to $200 million in start-ups and “open innovation partnerships” in its first year and expects to invest roughly the same amount over the next five years.

As a strategic investor, the new fund will look to bring technologies developed by its portfolio companies in-house for use across the three-brand alliance that comprises the group. It also intends to incubate entrepreneurs and will make investments across a startup company’s life-cycle.

That its first deal is in a battery technology developer shows exactly how much emphasis automakers are placing on electrification in the coming years. When it was first going public with its technology Ionic Materials was hailed in some quarters as a “Jesus battery” for its solid-state, cobalt-free battery materials. With the investment the Alliance has agreed to help out with research and development as the Massachusetts-based company looks to bring its solid polymer electrolyte to market.

The roughly $1 billion commitment puts Renault-Nissan-Mitsubishi in the pole position when it comes to automakers committing to corporate venturing. Both BMW iVentures and GM Ventures have longer histories with venture capital (and BMW expanded its iVentures commitment to over $500 million for the next ten years), but their funds are smaller. While Toyota set up an investment vehicle to back robotics and artificial intelligence companies earlier this year and Ford is working with Techstars on a mobility accelerator program in Detroit.

The only company that seems willing to throw as much capital around the technology industry at a similar scale is Volkswagen, the world’s number two automaker. Volkswagen doesn’t appear to have a dedicated venture investment group, instead making direct investments in companies or setting up joint ventures with other automakers.

Renault-Nissan-Mitsubishi does also invest roughly 8.5 billion euros in its own research and development, but that differs from capital commitments in new companies.

The new venture firm will be led by François Dossa, who previously served as the chief executive officer of Nissan Brazil (and has a background in investment banking).

Nissan has been down the road of working and partnering with startups before. The company was an early proponent and partner of the failed electric vehicle startup Better Place, which raised $850 million at the height of the cleantech bubble, but collapsed by 2014.

That experience may have left Renault feeling a bit shocked, but the company has since recovered. It’s planning to launch 12 pure electric vehicles by 2022 and will bring 40 autonomous vehicles to market and additional robotically-enhanced ride-hailing services.

The first offices for the new fund will be in Silicon Valley, Paris, Yokohama and Beijing — which align with the member companies that are committing capital to the alliance. Renault and Nissan will both put up 40% of the capital for the new fund, with Mitsubishi Motors financing the remainder.

Do you want to join us in this Venture Fund? Call us! contato@hojeconsultoria.com.br