Amazon has reiterated its commitment to the UK by opening a new so-called Development Centre in the heart of Cambridge – three storeys of premium office space housing 400 employees dedicated to research for products from Amazon’s AI-assistant Alexa to the brave new field of Prime Air drone deliveries.

“The UK has fantastic history of innovation, with hundreds of years at the absolute cutting edge of innovation, and that continues to be true today,” said Gurr. “When picking a site for a development centre you have to start with where you find the world’s best scientists, engineers and technologists. But it also has to be somewhere that people want to come and live. Cambridge is a fabulous town where people want to live and work.” 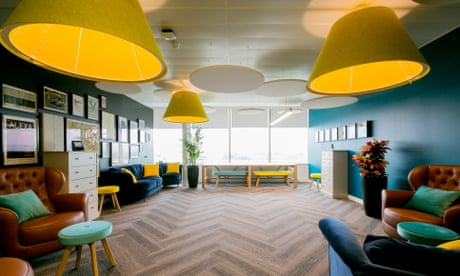 The new building forms part of Amazon’s £6.4bn investment in the UK since 2010, and will contribute to the 5,000 jobs it has pledged to create in the UK during 2017. It’s not your average office lined with dull fluorescent lighting and rows and rows of soulless computer workstations, but it isn’t the wild and wacky fun-palace often associated with big US technology firms, either. There are no porthole doors or psychedelic rooms. The beanbags and bizarre egg chairs have been left at home, leaving room for intelligently designed open and closed spaces engineered to allow collaboration and chance encounters on the stairs or coffee point that often fosters real innovation.

“We want the serendipitous, come-and-have-a-cup-of-coffee-for-a-chat environment, so we have open staircases between floors,” said Gurr. “But we’ll tend to focus on things that generate hard work and innovation rather than stuff that might be perceived as a bit more gimmicky.”

The lockers still have images of space invaders or golden-age film stars, and there are still the “phone booths” – a small glass box with a desk and a phone where people can go to join a conference call without disturbing others – and the walls are lined art. A piece made of moss and blue plastic representing the Amazon river frames one corridor, while a set of stairs has what looks like the top of hundreds of Amazon Echos mounted into the wall.

There is also a roof deck on every floor for staff to enjoy some outside space in a region that has half the national average rainfall each year, and two cafes over just three floors. Caffeine clearly plays a central role in Amazon’s innovation generation.

The outside of the building is less interesting; walking past, you wouldn’t realise it contained any Amazon office space, a characteristic shared by even the biggest Amazon offices in its hometown of Seattle. It is the work that is being done inside that is the most interesting part of the new centre. Amazon’s distributed teams work across anything and everything, from features of the front-end site that people use to shop to the devices and technologies that are seen as Amazon’s future.

The team in Cambridge plays a large role in the development of Alexa, for instance: from the machine learning that powers it, the back-end knowledge that lets it answer locally relevant questions such as “who is Dušan Tadić”, to the speech synthesis systems that allow Alexa to sound almost human.

While those are the kind of roles could be placed anywhere, they were created in the UK by Amazon’s purchase of a Cambridge-based AI firm Evi in 2012, which formed a significant chunk of Alexa and the availability of talented data scientists. Some roles are unique to the UK given the favourable regulatory climate.

“One the reasons we do a lot of the Prime Air team work in Cambridge is that we signed the Pathfinder agreement with the Civil Aviation Authority, which allows us to test drones and real customer deliveries,” said Gurr. “It’s a rather progressive way of thinking about this – instead of sitting there and saying we’re going to write the regulation in isolation without understanding the technology, they’re going to be looking over our shoulder every step of the way and they’re going to develop the regulation hand-in-hand with the technology. If we do that we get better outcomes.”

Beyond the Prime Air team, Cambridge also houses Amazon’s teams that work on the recently announced Amazon Cloud Cam, the Echo Look and Echo Showdevices. Members of the UK innovation teams have been instrumental in the development of Amazon’s long-standing video services and its X-ray features that overlay information on ebooks and videos, such as current characters or actors.

The new Cambridge site joins Amazon’s engineering and research teams in London and Edinburgh, which was set up 14 years ago in a basement but now has office space alongside Microsoft and the British Council in Waverley Gate, forming part of the 24,000 people employed by Amazon in the UK.